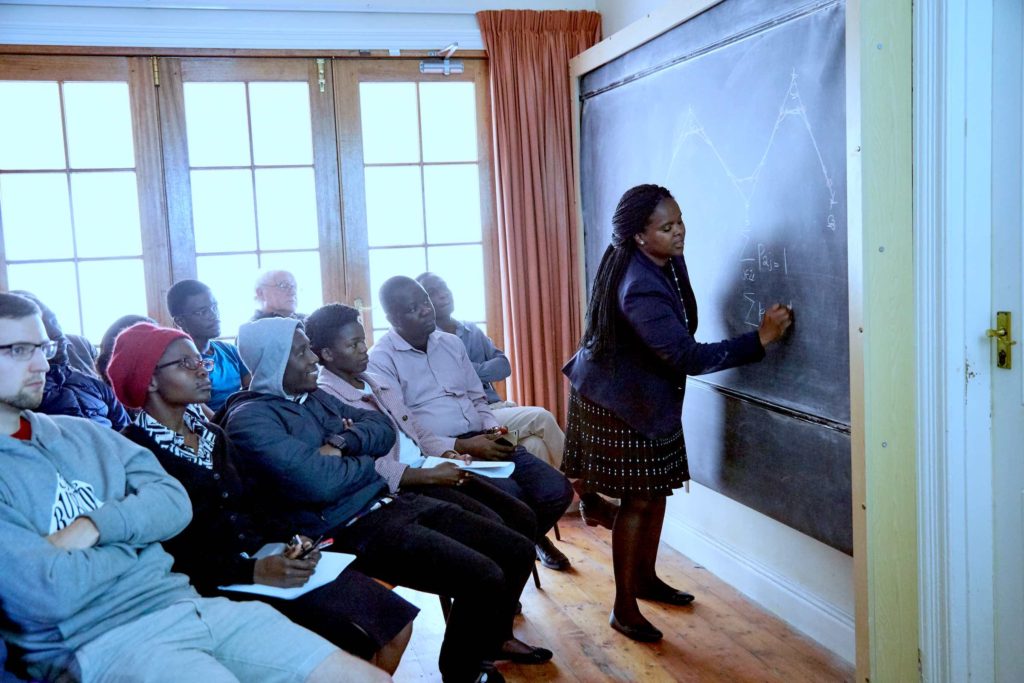 The AIMS NEI Fellowship Program for Women in Climate Change Science seeks to foster increased female participation in and contribute to a more sustainable societal response to climate change.

The African Institute for Mathematical Sciences Next Einstein Initiative (AIMS-NEI) is pleased to invite interested female scientists to apply for the third round of the AIMS-NEI Fellowships for Women in Climate Change Science (WiCCS). Climate change – including global warming – poses significant threats to humanity. Documented impacts of global warming include an increased frequency and severity of heatwaves across the globe and frequent droughts, both of which exacerbate food insecurity and health problems in many parts of the world, particularly in Africa.

The AIMS-NEI Fellowship Program for Women in Climate Change Science (WiCCS) seeks to increase women’s participation in, and contribution to, to a more sustainable societal response to climate change.

We are pleased to open the fourth call for application for the AIMS-NEI Fellowship program for Women in Climate Change Science. The application deadline is the 31 August 2021 23:59 CAT.

This fellowship program was made possible by a grant from the International Development Research Centre, Ottawa, Canada, www.idrc.ca, and financial support from the Government of Canada, provided through Global Affairs Canada (GAC), www.international.gc.ca. It is part of a broader effort by AIMS-NEI to build the intellectual capital needed to better our understanding of the causes of climate change in Africa, and to solve the myriad challenges to Africa’s development resulting from climate change.

Established in 2017, the first and second calls for applications attracted highly competitive applications and eventually, six fellowships were awarded to dynamic women scientists working in the area of climate change science and its related disciplines. By the end of 2021, 20 fellowships in total would have been awarded to outstanding women working on (i) revealing the triggers of our changing climate; (ii) mapping past, current and future climate patterns; (iii) increasing our knowledge of the impacts of these climate patterns on humanity and life on earth; (iv) providing recommendations and solutions on how best to adapt, mitigate or increase our resilience to climate change and its associated impacts, etc.

The first cohort of Women in Climate Change Science had the privilege to interact with the Canadian Minister of International Development during her visit to AIMS Rwanda in November, 2018

Climate change represents one of humanity’s greatest challenges of the 21st century. The continued ascent of our species depends to a significant extent on our ability to limit further catastrophic changes to the climate and to adapt to both past and future changes. In many parts of the world, changes in climatic variables – including incessant increases in temperature and declines in precipitation – are already having detrimental impacts on food security, human health, energy, biodiversity, etc. Some of these impacts further alter the climate – e.g. plant biodiversity loss reduces CO2 sequestration and contributes to rising temperatures – creating positive feedback loops with increasingly perilous consequences for humanity.

It is recognized, including by international institutions like the United Nations that a sustainable societal response to these challenges requires the collective participation of both men and women. However, women have historically had fewer opportunities than men to play significant roles in society’s quest for solutions to climate change. This is despite the fact that in many parts of the world women’s livelihoods are more dependent on climate-sensitive services afforded by natural ecosystems, making them more vulnerable to the impacts of climate change.

The AIMS-NEI Fellowship Program for Women in Climate Change Science (WiCCS) seeks to increase women’s participation in, and contribution to, a more sustainable societal response to climate change. This fellowship program was made possible by a grant from the International Development Research Centre, Ottawa, Canada, www.idrc.ca, and financial support from the Government of Canada, provided through Global Affairs Canada (GAC), www.international.gc.ca. It is part of a broader effort by AIMS-NEI to build the intellectual capital needed to better our understanding of the causes of climate change in Africa, and to solve the myriad challenges to Africa’s development resulting from climate change.

Applications are invited from outstanding female scientists currently residing anywhere in the world. Successful applicants are expected to execute, in a suitable African host institution, a self-initiated project with the potential to contribute significantly to the understanding of climate change and its impacts, and/or to the development and implementation of innovative, empirically-grounded policies and strategies for climate change mitigation, adaptation and/or resilience, among others.

Because mathematics is important for establishing rigorous linkages between observations, their explanations, and the evidence needed to support impactful decision-making, preference will be given to applicants proposing projects that make substantive use of the mathematical sciences, be it for modelling climate change, quantifying its impacts, evaluating the cost-effectiveness of interventions, designing experiments, analyzing data, or other relevant activities.

To be eligible, applicants must be:

To apply, please complete this online application form and submit by the 31 August 2021, 23:59 CAT with the following documents attached:

Applicants should request that three confidential letters of support be emailed to ms4cr-fellows@nexteinstein.org, using as subject “MS4CR fellowship application support letter-first and last name of applicant” by the application deadline. Two of these letters should come from the applicant’s immediate supervisor at her home institution and the named collaborator at her proposed host institution. At least one letter should come from a referee who is qualified to assess the applicant’s experience in climate change research, practice, and/or policy. You should share with your referees a copy of the ‘Terms of Reference for Fellows’ and the ‘Instructions for Referees’ document. These can be downloaded on the website.

Incomplete applications will not be evaluated.

Applicants are advised to carefully read the following documents:

Fellows will be selected by an international selection committee appointed by AIMS-NEI.

All complete applications received by the application deadline will be screened for relevance by a Fellowship Oversight Committee. The Oversight Committee will send each application to at least two reviewers for reviewing and scoring based on a defined soring sheet. The reviewers’ scores and associated comments will be forwarded to an International Selection Committee. This Selection Committee will select and interview a subset of the applicants, and then choose and recommend to AIMS-NEI about four applicants deemed most qualified to receive a WiCCS fellowship. All reviews done by the Selection Committee members and other reviewers will be based on the following criteria:

For more information about the selection process and the committees mentioned above, please consult the following documents:

Fellows will be required to submit quarterly reports on their progress using the reporting template provided below. These reports must be co-signed by the named collaborator at the Fellow’s host institution. Fellowship payments will be withheld from Fellows who fail to submit complete and accurate progress reports in a timely manner.

In the event that a Fellow needs to take a break from her tenure of the fellowship to continue at a later time, she must submit a written request to extend her fellowship tenure using the form provided below. Such extensions will be granted only under exceptional circumstances and at no additional cost to AIMS-NEI. In such cases, a new agreement letter specifying the fellowship resumption date as well as modified reporting and payment schedules will be issued to the fellow.